About the Park
Memorial Park is the main city park in Albany. It has both a formal and informal character. Its formal elements include wide lawns and entry walkway, tall trees, and the grandeur of the Veterans Memorial Building. Its informal character stems from heavy use by the community for gatherings and passive and active recreation. Public events held at the park include concerts, July 4 celebrations, outdoor movies festivals and fairs.

It is also frequently used for picnicking. Many children and teens use the park, including students from neighboring Albany High during breaks and lunch hours, toddlers 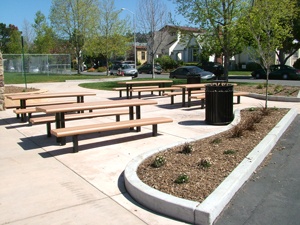 at the recently renovated and very popular playground, and students attending the Teen Center after-school program. Picnickers and those playing with balls, Frisbees, dogs, etc. informally use the wide lawns as well as the designated picnic area. The park also attracts many users to its playing fields and tennis courts.

The park occupies most of the large block bordered by Portland Ave. to the south, Carmel Ave. to the east, Thousand Oaks Blvd. to the north, and Albany High School to the west. The south area of the park is where the artwork is to be located and playing fields are located in the back, to the north.

History
Memorial Park was likely established during the 1920s. The neighborhood in which Memorial Park is located was still open space during the early years of Albany’s history, and one long-time resident recalled hunting squirrels in the area now occupied by the 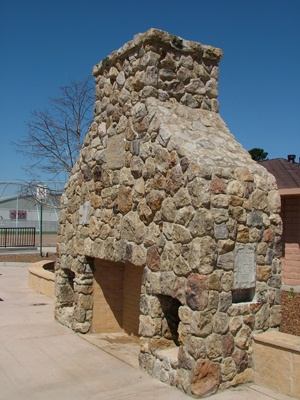 park and finding abundant mushrooms after a rain. Another resident, interviewed during the early 1980s when she was 90 years old, recalled that the area where Memorial Park is today was, around 1912 when she married, a “beautiful meadow – little chipmunks had their holes everywhere – little owls and jackrabbits.”

The centerpiece of the park, the Veterans Memorial Building, was built between 1931 and 1933. This grand Spanish vernacular building was one of 10 similar memorials designed by Alameda County Architect Henry Meyers. A monument outside the Veterans Memorial building is dedicated to Albany’s World War veterans and dated 1926. A large stone fireplace in the park’s picnic area is dated 1933.

Historical architects have suggested that the Veterans Memorial Building is potentially eligible for listing in the California Register of Historical Resources. It still has most of its original features -- tile roof, Spanish tile accents, grand main hall with stage, etc.