About the Waterfront & Bulb

At the end of Buchanan Street, just west of Interstate 80, lies the Albany waterfront. The contradictions and complexities of the site are easily apparent. Breathtaking views of San Francisco, the Golden Gate and San Francisco Bay bridges, Alcatraz, and Angel Island can all be seen from a shoreline that has changed little since its days as a landfill site for construction debris. The southern portion includes Golden Gate Fields Racetrack and its vast parking area – often empty as a result of changes in attendance over recent decades and the increased popularity of off-track betting. The land to the north is called the “Plateau.” This large, flat, open area looks somewhat like the “overflow” parking lot it once was, but a portion is now fenced off to protect a recently-created habitat for burrowing owls. To the west is land, known as the “Bulb,” which belongs to the city of Albany, but is planned to be incorporated into the Eastshore State Park – a park that includes, and protects, most of the undeveloped land on the Bay shoreline between the foot of the San Francisco Bay Bridge in Oakland and Richmond’s Marina Bay neighborhood. On the Bulb, foot paths wind their way between large slabs of broken concrete. Volunteer plants are mixed in with fanciful anonymous art and homemade structures created by a small, dedicated community that loves this “wild,” little peninsula.

The Albany waterfront is the result of a colorful history. It was first settled by members of an Ohlone Indian tribe - the Huchiun - who left behind shell mounds and grindstones by Cerrito Creek at the base of Albany Hill. The Native American population was displaced by Mexican and Spanish settlers in the early 1800s when a large area of the East Bay, including what is now the Albany waterfront – consisting mostly of a large salt marsh and an island called El Cerrito del Sur – was granted to Luís Maria Peralta in 1820 by the Spanish governor who controlled the region at the time. The Peralta family sold the island (which is now the site of the Golden Gate Fields grandstand) to John Fleming and

what is left of that parcel is known today as Fleming Point. In 1879, the Giant Powder Company, suppliers of dynamite to the gold miners of the Sierra, selected Fleming Point as the company’s location after frequent accidental explosions made the company unwelcome in San Francisco. Dynamite factories dominated the Albany waterfront until 1905 when they were replaced with less explosive chemical factories.

The 1906 San Francisco Earthquake brought thousands of displaced San Franciscans to the East Bay. In those years, Berkeley residents used the edge of the marsh at Fleming Point as a garbage dump. History tells us that Albany was incorporated as a city to stop Berkeley from dumping its garbage there, making protection of the waterfront critical to the founding of the city (originally incorporated as Ocean View in 1908, and renamed Albany, in 1909.) Over time, the area between the shore and the island fused, eliminating El Cerrito del Sur, and creating what we know today as the Albany waterfront.

Voices to Vision: Shaping the Future of the Waterfront

In 2007, Albany decided to engage residents in a process that it hoped would help heal the divisions that have emerged over site development issues in recent years, and also engage a broad cross-section of residents to come together to develop a shared vision for the waterfront. To create this vision, in the Spring of 2008 the city of Albany, through its Waterfront Committee, selected Fern Tiger Associates to design and implement a program to involve the broad Albany community in a participatory process through which the voices of Albany residents could formulate a clear and strategic vision for the future of the city’s shoreline. Read the full  Voices to Vision reports for more information about the vision for the future of the Waterfront.

Art at the Bulb

There are two public art installations at the Waterfront & Bulb area, "Herons" and "The 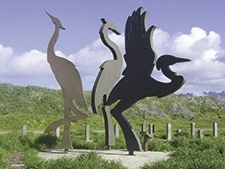 Cove". "Herons" is a metal sculpture by Mark Canepa. The City in conjunction with the State Coastal Conservation paid $10,000 for the sculpture in 1999. "The Cove" is also a sculpture made from recycled Solano Avenue sidewalk and created by Carlo Ferretti in 1999 for $10,000.

The Bulb is home to a vast array of urban art including mural, stencil, graffiti, sculpture, and installation art. Sniff is a group of artists that have notably worked on the Bulb, painting large driftwood murals as well as erecting sculptures on the north west corner of The Bulb. Another Bulb landmark, referred to as "The Castle," is a large concrete, rebar and plaster shelter which sits on the south west corner of the Bulb, directly opposite the Golden Gate Bridge.

The Bulb is a common recreational destination for East Bay dog owners. The Bulb's long, natural meander provides healthy exercise, while its location next to the Albany Waterfront is ideal for dog owners who enjoy beaches.