About the Park
Jewel's Terrace Park, a small neighborhood park in southeastern Albany, is one of the city’s hidden treasures. The park is named after former Mayor and long-time resident Jewel Okawachi. Even some Albany residents do not know where the park is located. Bordered to the east and west by the backyards of homes on a portion of Neilson and Tevlin Streets, it has two unassuming entrances on small side streets: Terrace St. to the north and Francis St. to the south.

The residential neighborhood surrounding the park is made up of typical Albany bungalows on narrow streets. The park is heavily used in many eclectic ways by the neighborhood. Many children use the play area, neighbors hold regular gatherings and parties in the picnic area, and dog walkers as well as children and adults playing informal sports use the lawn area. Several backyard gates lead directly into the park, and some neighbors’ gardens extend into the edge of the park. There are tennis courts and a small basketball area at the southern end of the park, and there may be a community garden in the park in the future.

History
Although little is known about its history, Terrace Park was probably the first park established in Albany because some of the City’s earliest residences are in this area. The neighborhood in which it is located was, in the mid-1800s, part of a cattle ranch owned by Jose Domingo Peralta. Peralta’s first house, a one-story, tile-roofed adobe with dirt floor, was built in 1841, on Albina St. in Berkeley, just south of what is now the Albany border and near the current site of St. Mary’s College High School. 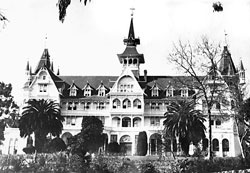 After the decline of the Spanish ranches, a grand, 4-story, 120-room hotel, the Peralta Park, was built during the 1880s by actor Maurice B. Curtis. The Peralta Park Hotel was ornamented with many steeples, dormers, and turrets and surrounded by a 20-acre garden. The hotel was in what is now Albany, near the site of Jose Domingo Peralta’s original adobe.

Around the turn of the 20th century, the first homes were built in the area of the Peralta Park Hotel, along dirt streets that residents navigated on foot, on horseback, or in horsedrawn cars, struggling with mud during the rainy season and floods after the Santa Fe railroad tracks were laid in 1902 (the mounded dirt on which the tracks rested created serious drainage problems). The original streets in this area were Neilson and what is now Curtis, both of which are just west of present-day Terrace Park. Early residents describe herding cows in the area and shooting coyotes that preyed on their chickens. Homes were lit by coal lamps. There were no streetlights, making it difficult to find one’s way at night. One of the first homes, at 1061 Curtis St., belonged to David Thomas Griffin, an electrician who moved across the Bay from San Francisco to wire the Peralta Park Hotel. 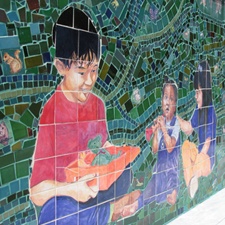 When Curtis’s fortunes fell, the Peralta Park Hotel became Mr. Sprague’s School for Girls and later Professor Dunn’s School for Boys. In 1903, the Christian Brothers purchased the property and started what is now St. Mary’s College High School. A fire seriously damaged the old hotel building in 1946, and it was finally demolished in 1959.

The first piece of public art in this park was dedicated in 2007. "Tile Mural", by Josef Norris honors the history of the Terrace Park neighborhood and the City with images from the past and present, including dozens of tiles hand painted by the community.