What is a General Plan? 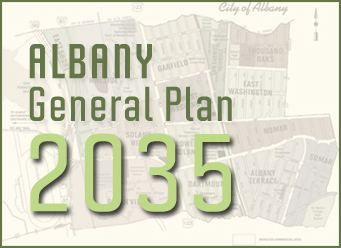 California state law requires every city and county in California to prepare a “General Plan” which guides decisions about future growth and development. A General Plan covers topics such as land use, transportation, housing, open space, natural resources, and public services. Local General Plans have been mandatory in California since the 1950s. State law also requires such Plans to be periodically updated in response to changing conditions. Each General Plan includes maps expressing the community’s vision of how and where it will grow and change in the future. The General Plan typically has a time horizon of about 20 years, giving the city an opportunity to think long-term about what it wishes to preserve and what it wishes to change. Once a General Plan is adopted, it is used by the City Council, local commissions, and City Staff as they make day to day decisions about the community’s future.

The City Council of the City of Albany adopted the Albany 2035 General Plan on April 18, 2016 (CC Resolution 2016-24). Links to the individual chapters can be accessed below.