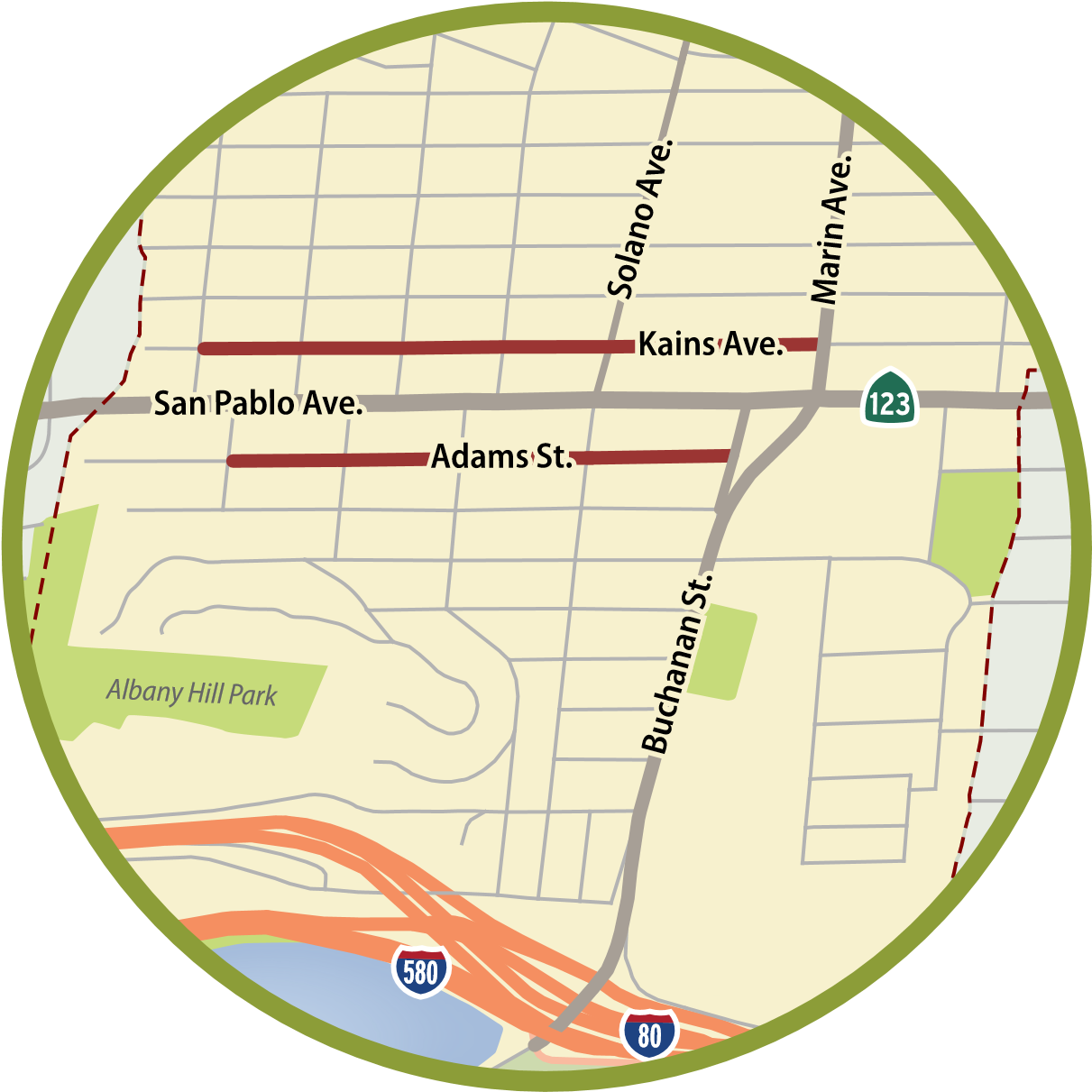 Bicycling on San Pablo Avenue is challenging as this major arterial is a bus and truck route with high traffic volumes and fast vehicular speeds. These conditions present a safety challenge for experienced cyclists and discourage less-experienced riders or school children from cycling.

To encourage cycling in Albany, the concept of installing alternative bikeways to San Pablo Avenue along Kains Avenue and Adams Street was recommended in the Albany Active Transportation (ATP) Plan in 2012. Developing a conceptual plan for suitable bikeways on these corridors is difficult because Kains and Adams are a system of one-way residential streets parallel to San Pablo Avenue, thus requiring cyclists to travel in two-directions, which may not always be an alternative on one-way streets. In an effort to determine the feasibility of installing bikeways on these corridors, the City envisioned a community engagement and coordination process to help understand the corridor issues and possibilities.

The City obtained a Measure B grant from the Alameda County Transportation Commission (Alameda CTC) to conduct a feasibility study for the installation of bikeways along Kains and Adams as north-south alternatives to cycling on San Pablo Avenue. Measure B is the ½ cent sales tax dedicated to transportation projects passed by Alameda County voters in 2000, extended and augmented by Measure BB in 2014.

Parisi Transportation Consultants have been selected to conduct this study. The City initiated the process by holding two Community Events: A Kickoff Community Meeting and a Walking Audit.

On October 4, 2017, the City held a third community event to discuss options for traffic calming and potential bikeway facilities on Kains and Adams.  See Presentation.

The Traffic and Safety Commission discussed potential traffic calming options and potential bikeway facilities for the Kains and Adams corridors at its October 26, 2017 meeting and made the following recommendation to City Council:

The Commission moved to recommend the two–way shared street / bike boulevard concept for Kains Avenue and Adams Street. The design elements carried forward by the Commission include:

• Two-way vehicle and bicycle traffic permitted on both Kains and Adams.

• Barriers placed at the north end of each block of Adams Street, i.e., the south leg of each intersection. Barriers placed at the south end of each block of Kains Avenue, i.e., the north leg of each intersection. Barriers would prevent traffic from entering from the side streets onto Adams Street in the southbound direction, and onto Kains Avenue in the northbound direction.

• Consideration of lane edge lines to delineate the parking areas.

• No changes to stop controlled intersections along the Kains and Adams corridors.

• Amend on-street parking regulations to allow parking in either direction on those corridors.

On December 4, 2017, the Albany City Council discussed the proposal after receiving a presentation from city staff and consultants and hearing public comment. The Council referred the matter back to staff to develop a pilot program for the Kains/Adams project and bring back to the Trafic & Safety Commission.

Consultants for the city have now prepared plans (3MB PDF) and a photo simulation  (2MB PDF)of the proposed pilot project which will be presented to the Traffic & Safety Commission at its next meeting on December 18, 2018 meeting.

Free viewers are required for some of the attached documents.
They can be downloaded by clicking on the icons below.