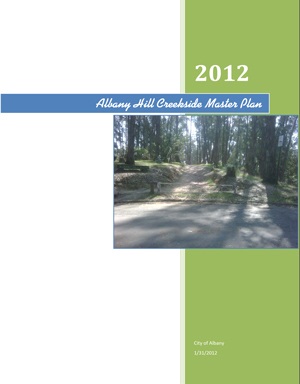 Background (Staff Report for 10/18/04)
On January 6, 2003, the City Council and the Parks and Recreation Commission met to discuss various parks and recreation related issues. The Commission recommended that the Council direct staff to begin the process of retaining a consultant to develop a new Parks, Recreation and Open Space Master Plan. The plan’s purpose was to create a clear and solid set of goals, objectives, projects, standards and implementation strategies that would provide direction to 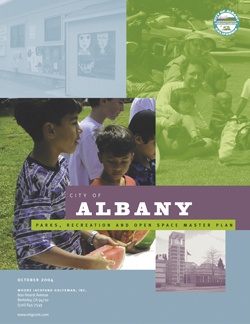 staff, the Commission and the City Council for development, redevelopment and enhancement of the City’s park system, open space, recreation facilities and recreation programs for the next 5-10 years.

A new Master Plan was necessary because the previous plan had been developed in 1973 and was outdated and obsolete and because Albany voters had just passed Measure F, a $14.5 million dollar bond measure that included funding for park development and improvements. In addition, the Commission had received numerous requests from special interest groups for proposed modifications and alterations to City parks. The Commission felt that a new Master Plan was necessary to evaluate and assess in the context of the community as a whole, requests based on needs, goals, standards and deficiencies in the park system.

On April 7, 2003, the City Council accepted the Commission’s recommendation that a Request for Proposals (RFP) be issued for consulting services to assist in the preparation of the plan. Through the RFP process the City received proposals from five firms, which were winnowed to three firms by a subcommittee of the Parks and Recreation Commission. The Commission heard presentations and interviewed the three finalist firms. On June 12, 2003, the Council accepted the Commission’s recommendation to enter into an agreement with Moore Iacofano Goltzman (MIG), to prepare the Master Plan.

Shortly thereafter, MIG began the work on many of the tasks that were necessary for the plan. These tasks included analyzing Albany’s demographics, inventorying and evaluating current parks and recreation facilities and the management and operational functions of the Recreation and Community Services Department and the Public Works Division of the Community Development Department. On October 18, 2004 the City Council passed a resolution to adopt the Parks, Recreation & Open Space Master Plan (Resolution #04-05). October 18, 2004 Council Meeting Staff Report