Early Settlers: Albany's heritage is intertwined with its location along the eastern shore of San Francisco Bay, its temperate climate and its unique natural features. This environment supported the City's first known residents, a tribe of Native Americans known as the Costanoans (coast dwellers) or Ohlone, who lived at the base of Albany Hill along Cerrito Creek. Shell fragments and grinding rocks found at Creekside Park serve as a reminder of these people who lived in the Albany area until the early 19th Century, when the Spanish land barons arrived in California. 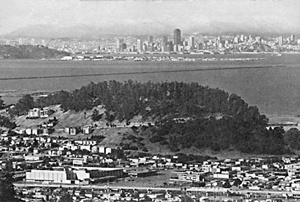 In 1820, the King of Spain granted a large portion of the East Bay to Don Luis Maria Peralta, who then divided the land among his three sons. Jose Domingo received the northern portion, which included the area of Berkeley and Albany, and used the land for cattle farming.

Gold and dynamite: The discovery of gold and the entry of California into the United States brought many settlers to the west, ultimately ending the land grant economy. The Peralta land was divided into small parcels and sold as farms or homesteads.

Gold mining created a demand for dynamite, and Albany became home to a number of powder plants at Fleming Point, which is the present site of Golden Gate Fields Racetrack. This industry died out in 1905 after a series of explosions and fires. In 1906, the great San Francisco earthquake and fire occurred, resulting in a large migration of families from San Francisco to the East Bay. This significantly impacted development in Albany and other nearby jurisdictions.

Incorporation: In 1908, area residents protested the dumping of Berkeley garbage in their community by incorporating and became the City of Ocean View. In 1909, voters changed the name of the city, primarily to distinguish the City from many other communities in the area with the name of Ocean View. On a vote of 38 - 6, Albany was chosen as the new name, in honor of the birthplace of the City's first mayor, Mayor Frank Roberts. In 1927, Albany voters adopted the City's first Charter, giving the City full control over its own governance. In 2008 the City of Albany celebratied its Centennial.

Recent History: After several failed attempts in the late 1920s to annex to Berkeley, Albany firmly established its independence, and by the 1930s had begun to create its own high school. During World War II, the Federal Government built a housing project called “Codornices Village” on land leased from the University of California, to accommodate the thousands of workers at the Richmond shipyards. Adjacent was the “Veterans Village,” which provided temporary military housing for the US Navy training base in the same area. After the war, both "villages" operated as a Federal Housing Project until 1956, when the 420 units reverted to University ownership and came to be known as "Albany Village," providing family student housing for those attending the University of California at Berkeley.

Although built in the early 1940s, the Golden Gate Fields racetrack did not begin successful operations until 1947, and was primarily used by the military during the war years. Adjacent to Golden Gate Fields was the Albany Landfill, a construction and demolition debris landfill that began operations in the late 1950s/early 1960s. This use eventually created what is now the Albany Plateau, neck and bulb. After the landfill closed in 1979, the resulting land area was used as a recreational area. In 2002, the area was incorporated into the East Shore State Park. With the exception of the Albany Bulb, this land is now owned by the State of California.